Influenza-1918: Homeopathy To The Rescue 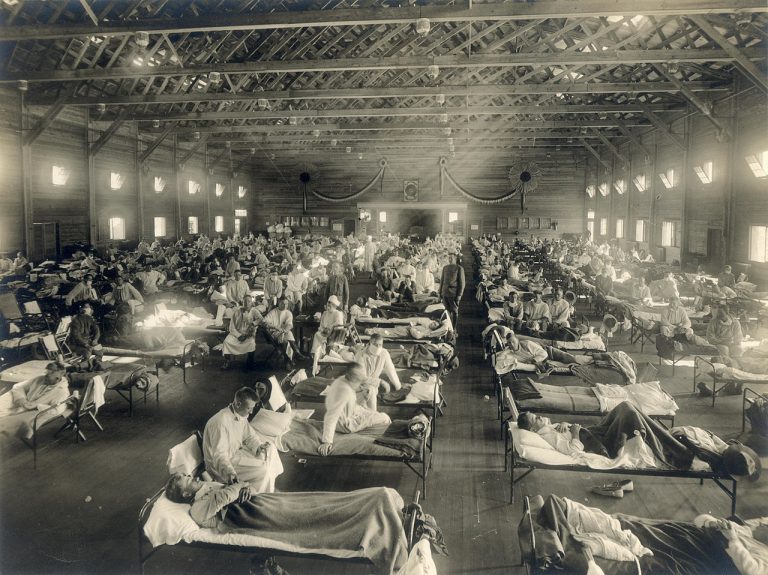 The New England Journal of Homeopathy
Spring/Summer 1998, Vol.7 No.1

The following is an extract of the chapter on the influenza epidemic of 1918 from Julian Winston’s upcoming history of homeopathy book-which does not yet have a title. Watch these pages for a review when it does come out. ed

It was called “the Great White Plague.” It is hard to imagine the devastation caused by the Flu Epidemic of 1918-19. People who lived through it reported that some one who was up and well in the morning could be dead by evening.

Dr. H. A. Roberts was a physician on a troop ship at the time. Another boat pulled alongside to get any spare coffins- it’s mortality rate was so high. On his return to port, the commander said to Roberts, “used all your coffins?” To which Roberts, who had been treating his ship with homeopathy, replied, “Yes, and lost not one man!”

The following is an extract from an article entitled “Homeopathy In Influenza- A Chorus Of Fifty In Harmony” by W. A. Dewey, MD that appeared in the Journal of the American Institute of Homeopathy in 1920.

Dean W. A. Pearson of Philadelphia collected 26,795 cases of influenza treated by homeopathic physicians with a mortality of 1.05%, while the average old school mortality is 30%.

Thirty physicians in Connecticut responded to my request for data. They reported 6,602 cases with 55 deaths, which is less than 1%. In the transport service I had 81 cases on the way over. All recovered and were landed. Every man received homeopathic treatment. One ship lost 31 on the way. H. A. Roberts, MD, Derby, Connecticut.

In a plant of 8,000 workers we had only one death. The patients were not drugged to death. Gelsemium was practically the only remedy used. We used no aspirin and no vaccines. -Frank Wieland, MD, Chicago.

I did not lose a single case of influenza; my death rate in the pneumonias was 2.1%. The salycilates, including aspirin and quinine, were almost the sole standbys of the old school and it was a common thing to hear them speaking of losing 60% of their pneumonias.-Dudley A. Williams, MD, Providence, Rhode Island.

Fifteen hundred cases were reported at the Homeopathic Medical Society of the District of Columbia with but fifteen deaths. Recoveries in the National Homeopathic Hospital were 100%.-E. F. Sappington, M. D., Philadelphia.

I have treated 1,000 cases of influenza. I have the records to show my work. I have no losses. Please give all credit to homeopathy and none to the Scotch-Irish-American! -T. A. McCann, MD, Dayton, Ohio.

One physician in a Pittsburgh hospital asked a nurse if she knew anything better than what he was doing, because he was losing many cases. “Yes, Doctor, stop aspirin and go down to a homeopathic pharmacy, and get homeopathic remedies.” The Doctor replied: “But that is homeopathy.” “I know it, but the homeopathic doctors for whom I have nursed have not lost a
single case.” -W. F. Edmundson, MD, Pittsburgh.

There is one drug which directly or indirectly was the cause of the loss of more lives than was influenza itself. You all know that drug. It claims to be salicylic acid. Aspirin’s history has been printed. Today you don’t know what the sedative action of salicylic acid is. It did harm in two ways. It’s indirect action came through the fact that aspirin was taken until prostration resulted and the patient developed pneumonia. -Frank L. Newton, MD, Somerville, Massachusetts

Aspirin and the other coal tar products are condemned as causing great numbers of unnecessary deaths. The omnipresent aspirin is the most pernicious drug of all. It beguiles by its quick action of relief of pain, a relief which is but meretricious. In several cases aspirin weakened the heart, depressed the vital forces, increased the mortality in mild cases and made convalescence slower. In all cases it masks the symptoms and renders immeasurably more difficult the selection of the curative remedy. Apparently aspirin bears no curative relation to any disease and it ought
to be prohibited. -Guy Beckly Stearns, MD, New York

Three hundred and fifty cases and lost one, a neglected pneumonia that came to me after she had taken one hundred grains of aspirin in twenty-four hours. -Cora Smith King, MD, Washington, DC

I had a package handed to me containing 1,000 aspirin tablets, which was 994 too many. I think I gave about a half dozen. I could find no place for it. My remedies were few. I almost invariably gave Gelsemium and Bryonia. I hardly ever lost a case if I got there first, unless the patient had been sent to a drug store and bought aspirin, in which event I was likely to have a case of pneumonia on my hands. -J. P. Huff, MD, Olive Branch, Kentucky.

In reading the accounts of the epidemic it seems that most of the deaths were caused by a virulent pneumonia that was especially devastating to those who depressed their system with analgesics-the most common being aspirin.

The Physician from whom I first learned homeopathy, Raymond Seidel, MD, HMD, said that he decided to be a homeopathic doctor during the flu epidemic when he was working as a delivery boy for a homeopath in New Jersey. Raymond Seidel told me that he decided to become a homeopathic doctor when he was a ten-year old delivery boy for a local homeopath. He said, “I saw that the people who were taking aspirin were dying, about half those who were drinking a lot were dying, and those that received homeopathic remedies were living.”