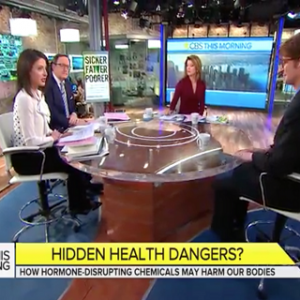 Sicker, Fatter, Poorer: The Urgent Threat of Hormone-Disrupting Chemicals to Our Health and Future… and What We Can Do About It.

Dr. Leonardo Trasande talking to “CBS This Morning” about his new book: “Sicker, Fatter,
Poorer: The Urgent Threat of Hormone-Disrupting Chemicals to Our Health and Future… and What We Can Do About It.”

The use of hormone-disrupting chemicals in consumerist products has been a subject of
heated discussion for many years now. With evidence suggesting a strong link between chemicals such as pesticides and phthalates and the surge in diseases like obesity, diabetes, brain disorders and fertility problems, the issue is now affecting the global populace on unprecedented scale as suggested in Dr. Leonardo Trasande’s new book “Sicker, Fatter, Poorer: The Urgent Threat of Hormone-Disrupting Chemicals to Our Health and Future… and What We Can Do About It.”

Joining the “CBS This Morning” discussion, Dr. Leonardo Trasande, a professor of pediatrics and environmental medicine, points out that the chemicals used in grocery, cosmetic and
personal care products affect the way hormone molecules signal and communicate within
our bodies which, in turn, paves the way for the onset of numerous serious diseases.
With over 1000 chemicals classified as hormone disruptors, the evidence distinguishes four particularly dangerous chemical agents used in consumerist products: pesticides, commonly used in agriculture, phthalates, widely used in personal care products and food packaging, bisphenols used in aluminum can linings, and flameretardants, prominently used in manufacturing of electronics, furniture and mattresses. Apart from a wide range of negative effects, these chemicals, in no small part, are also contributing to the obesity epidemic taking over the United States.

Dr. Trasande points out that next to physical inactivity and poor diet, hormone disruptors drive the obesity by changing the way our body converts nutrients into fat as opposed to muscle. On the bright side, this information also opens the door to a rather simple solution
when it comes to avoiding these negative effects.

Trasande stresses the need to limit the exposure to these chemicals instead of going for fundamental changes in one’s diet or lifestyle. A similar idea is expressed in a statement
released by the American Chemistry Council, recommending consumers to keep the exposure levels as low as possible by carefully studying the product labels before the actual
purchase.

The steps to take in order to limit this exposure see consumers avoiding canned foods, microwaving food that comes in plastic packaging, sticking to organic food-based diet as well as providing air circulation in living spaces by keeping the windows open.

When asked about the FDA’s decision to declare Bisphenol A as safe for consumption, Dr. Trasande talks about the need to empower the consumers to make up their own minds when it comes to choosing the healthier option on the shelf, which is also the running theme throughout his new book.

In order to avoid growing levels of birth defects, diabetes, breast cancer, ADHD and heart diseases, and, in turn, prevent the negative effect this has on the national economy (the consequences of chemical exposure are estimated to cost Government $320 billion a year), it’s crucial to educate the consumer about these simple preventive measures.