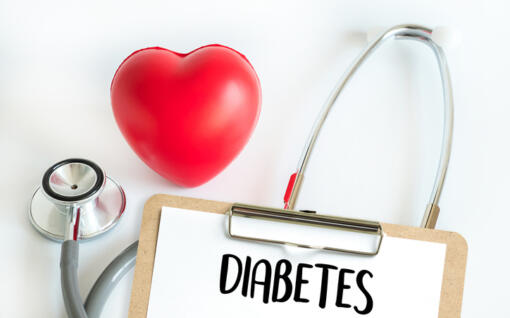 2015 guidelines from the American Diabetes Association (ADA) recommend a statin (cholesterol-lowering) drug for almost everyone with diabetes.

The 2018 guidelines from the American Diabetes Association state that risk factors for cardiovascular disease in diabetics include the following: hypertension, dyslipidemia, smoking, a family history of premature coronary disease, chronic kidney disease, and the presence of albuminuria.

Those which can be modified, should be – e.g. smoking. Those which cannot be modified naturally should be treated pharmaceutically – e.g. hypertension and dyslipidemia. The rest are simply a given – fate, if you will – indicating likelihood of developing heart disease when one already has diabetes.

Interestingly, there is no mention of diet or lifestyle choices among the risk factors. And yet diet is of paramount importance in the lifetime risk of developing diabetes, as is the choice to exercise or remain a couch potato.

Hypertension: The ADA defines hypertension as “a sustained blood pressure 140/90 mmHg” and reminds us that numerous studies have shown that antihypertensive therapy reduces ASCVD events, heart failure, and microvascular complications. The guidelines do recommend home blood pressure measurements, to avoid over-diagnosis of hypertension when the elevated pressure may only be due to “white coat syndrome”. Although, even that white coat syndrome diagnosis is indicative of an individual who lives at elevated levels of stress hormones, and who is almost certainly living at increased risk of both diabetes and cardiovascular disease because of the chronically elevated cortisol levels.

The 2014 evidence-based guideline for the management of high blood pressure in adults was unable to find evidence for a systolic blood pressure goal in people under the age of 60, or a diastolic goal in people under the age of 30. Therefore their recommendations for those age groups (anyone under the age of 60) were based on expert opinion which, in the classification of rules of evidence, is the very lowest form of evidence. Despite the lack of evidence, the recommendation was to treat hypertension to a goal of less than 140/90, based on the assertion that “hypertension leads to myocardial infarction, stroke, renal failure and death if not detected early and treated appropriately.”

There was a small loophole in the recommendations: “these recommendations are not a substitute for clinical judgment, and decisions about care must carefully consider and incorporate the clinical characteristics and circumstances of each individual patient.” I am in mind of a patient of mine who, at the age of 76, allowed someone to do a coronary bypass operation on her and who, at the age of 90 required a blood pressure of at least 140 systolic in order to have adequate mental function. She died eventually of something else just short of her 100th birthday. She never developed diabetes, and never lost her mental acuity. So hypertension does not necessarily always cause stroke, etc.

What is the evidence for the use of statin drugs in diabetes?

The first question has to be: Do statins lead to an increased incidence of diabetes? One study published in 2008 concluded that “Statins, as a class, do not demonstrate a statistically significant positive or negative impact on a patient’s risk of developing new-onset type 2 diabetes mellitus.” This seems like a curious conclusion, since in the paragraph immediately preceding that conclusion we read: “pravastatin’s tendency towards a reduction in risk and the other statins showing an increase in risk.” So with regard to statins, do they or do they not lead to an increased incidence of diabetes? Apparently it depends on the particular statin – all the statins except pravastatin showed an increased risk of development of diabetes. And “when all other statins other than pravastatin were evaluated together, a significant increase in the relative risk of developing diabetes was found”. My conclusion would be that the investigators had a bias toward exonerating the statins. But perhaps that’s just my interpretation…

In a presentation from MedScape Education in 2018, we read: “significant but small increased risk for developing diabetes from being on statins. Patients are not going to develop DM just from the statins. Certain statins can nudge prediabetic range into the DM range.” Pitavastatin appears have a neutral effect on blood glucose.

Another article on pitavastatin recommends better communication between patient and physician when attempting to modify blood lipids and experiencing myalgia. There was no mention of myalgia being associated with CoQ-10 deficiency or of using co-enzyme Q10 as a mitochondrial restorative mechanism to remedy the deficiency caused by the statin drug.

There is even some evidence that statin use is associated with increased coronary artery calcification and narrowing in diabetics with pre-existing disease.

So what is the benefit from taking a statin drug? If lowering cholesterol is not necessarily the major or even predominant effect of statins, and they cause bad muscle aches and even brain fog in some susceptible patients, what good are they?

They lower cholesterol. They accomplish this feat by inhibiting the action of an extremely important enzyme called HMG coenzyme A reductase. This enzyme is part of the pathway that makes cholesterol, so on the face of it, inhibiting that enzyme is a good thing. However, the same pathway is also responsible for making CoQ-10 which is essential for function of mitochondria all over the body. The mitochondria are the little energy factories present inside every cell of the body (except the cornea, which has no cells). Without mitochondria, we have no fire – no energy with which to function.

What’s more, cholesterol is the building block for all the steroid hormones, including vitamin D and all our sex hormones.

Low cholesterol is associated with muscle pain, fibromyalgia, mortality, depression, dementia and even heart failure. Old people with higher cholesterol levels have a lower risk of death within a limited timeframe. Obviously the eventual risk of death is 100%.

As things work out, the human body is infinitely varied, and there is a polymorphism in the HMG CoA reductase gene, such that some of us are more prone to body weight gain and insulin resistance than others. Thus we are faced with a dilemma – statins may be good for diabetics because they decrease the risk of an eventual stroke or heart attack – but at the same time in some of us they may increase the risk of developing diabetes – or myalgia – or dementia – or heart failure – depending on our genetics. And at the moment there is no easy inexpensive way to test that particular genetic polymorphism.

There are certainly excellent non-pharmaceutical ways to reduce inflammation, decrease insulin resistance and shed weight. Omega-3 fatty acids, Coenzyme Q-10, decreased carbohydrate intake, increased exercise – these are relatively easy ways to restore health without the need to resort to pharmaceutical manipulation with those attendant risks. Cooking with curcumin, making salad dressings with flax seed oil, using berberine to modulate blood sugar – all these are excellent choices for those who choose not to take stain drugs. The Mediterranean style diet is pretty easy to follow and a good solution for nutritional choices that can easily become a permanent way of life.

Those who are at risk for arteriosclerotic cardiovascular disease can perhaps benefit from a statin drug – once they have engaged in lifestyle changes that will benefit their health far more than simply taking a pill.

Let us not throw out the baby with the bath. But let us not pretend that the washcloth is the whole purpose of the bath, forgetting that the baby is the one who needs to get clean.

[4] How to Better Communicate with Patients with Dyslipidemia Experiencing Myalgia