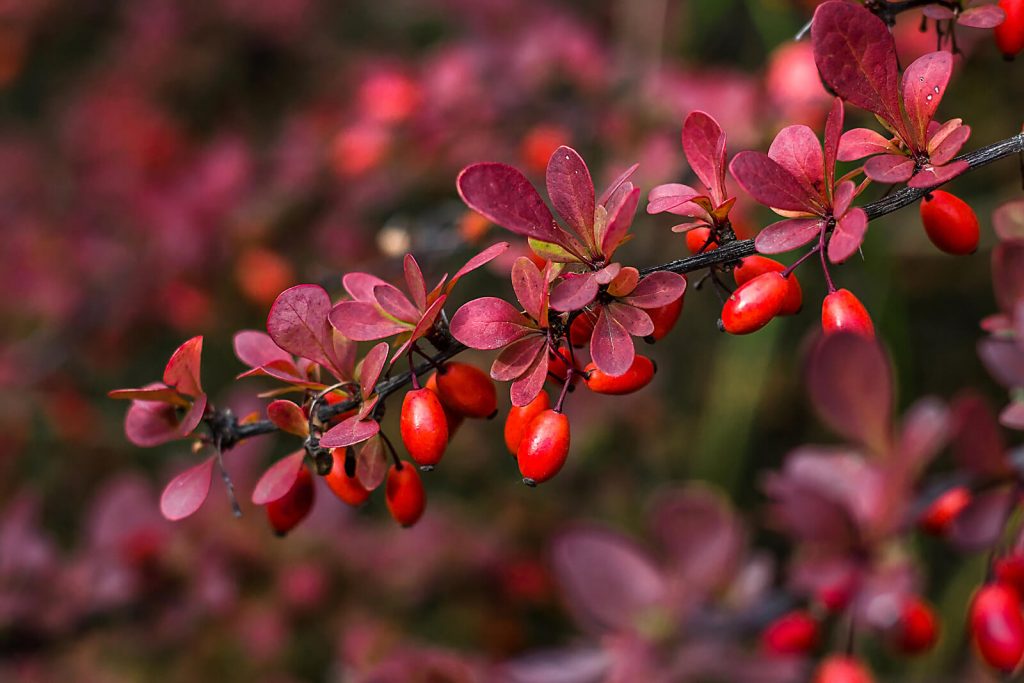 Most of our drug treatments for diabetes started out as plants that the pharmaceutical industry chemically manipulated – to change the potency, slightly change the form – and thus become subject to patent law and thus marketable as medicines. There is little profit in marketing food as medicine – as any retail grocer can tell you.

When these foods are consumed frequently, and in the context of a diet replete with vegetables and fruits, with minimal or no free sugars, they are an important part of blood sugar regulation, and can even be the sole treatment required to get type II diabetes back under control – as long as the disease has not progressed so far that the pancreas is nearly destroyed.

Also known as barberry, this plant is grown in the United States for its beautiful leaf colors. It is spiky, and some of the known 450 species grow wild over much of the US. It is cultivated in Iran, and used in cooking – Zereshk-Polo is a dish made from barberry, rice, and chicken. Iran has a desert climate similar to that of the SouthWest United States.

It is used as a homeopathic remedy with indications compatible with type II diabetes – migratory muscle pains mainly, with back pain in the area of the kidneys, the pain worse with exercise – all symptoms compatible with mitochondrial disturbance commonly seen in diabetes and other chronic illnesses.

Berberine is the main ingredient in an herb used for thousands of years in Chinese Medicine for the treatment of diabetes. The official name of the herbs is Coptis Chinensis.

Berberine appears to be effect in lowering blood sugar and regulating lipid metabolism (cholesterol, triglycerides, etc), both in rats and in human beings. It also appears to have some protective effects in injury to heart muscle –in rats and perhaps also in humans – perhaps due to its mitochondrial oxidation inhibiting effect.

Berberine has an excellent safety profile. Its major side effect appears to be diarrhea – when consumed in large quantity. It is used as a treatment for diarrhea when consumed in a small quantity. One study was unable to find a lethal dose for mice given berberine orally, perhaps because of limited absorption by the oral route.

Berberine is effective enough in disturbing mitochondrial function that it has been found to induce cell suicide (apoptosis) in liver cancer cells – at least in a petri dish.

One pilot study combined conventional pharmaceutical medications for type II diabetes with an extract of Berberis, resulting in better glycemic and lipid control than with the pharmaceutical drug alone. They did recommend also using silymarin (milk thistle) in combination, to improve the oral absorption of the berberine. Both berberine and silymarin are available as supplements, if you don’t happen to grow milk thistle in your back yard.

Berberine is anti-inflammatory. It reduces dental plaque and gingivitis, often seen as a marker for systemic inflammation, which can significantly worsen glycemic control in diabetics. It reduces the production of inflammatory compounds in the gut during acute GI infection in rats.

It activates AMPK by inhibiting mitochondrial function and promoting the assembly of adiponectin molecules into a form which increases peripheral insulin sensitivity of the muscles. It operates similarly to metformin, in partially blocking enzymes in respiratory chain complex I of the mitochondria. It is thought that both berberine and metformin stimulate glycolysis – the metabolic pathway which produces energy through the break-down of glucose.

Berberine decreases the absorption of glucose – perhaps by inhibiting alpha-glucosidase or other sugar-digesting enzymes – which could explain both the glucose-lowering and the diarrhea-causing effects. It inhibits the absorption of fructose, maltose and other disaccharides.

Safe amount for humans, if given as a supplement would be in the neighborhood of 300 mg per kg – that would be about two 500 mg pills per day for a 200 pound person. Diarrhea would be the limiting side effect. It is possible that berberine could cause low blood sugar, but unlikely, since it is so poorly absorbed.